Clearstone offers the best Q-switched laser systems in Houston, TX. We have selected high powered Alexandrite and Nd:YAG lasers to offer the widest selection for the effective treatment of the most ink types and colors.

For as long as humankind has performed tattoos, there’s been a need for a safe and effective method of removing them. Until the develoment of lasers, tattoo removal was performed by direct abrasion, or salabrasion-rubbing the tattoo with an abrasive material or rock salt. Besides being very painful, these methods were only partially effective and caused considerable scarring.

It’s been estimated that about 25 million people in the United States have at least one tattoo, and with the current popularity of body art, over 250,000 men and women are being tattooed each year. The average age of receiving a tattoo is 18 years, often as a statement to express individuality or group identity, convey personal symbolic meaning, or for purely decorative (no specific meaning). However, these feelings often change with time, leaving the tattoo as a permanent reminder.

Most effective way to remove tattoos

In the last 15 years, Q-Switched lasers have been shown to be very effective at removing tattoos. Q-Switched Alexandrite (deep red @ 755nm) – usually effective for most black, blue, and green pigments. Q-Switched lasers deliver very high power over very short pulses of laser light, which pass through the skin and break up the particles of tattoo pigment. After the ink is shattered, white blood cells and the lymphatic system remove the treated tattoo. It’s important to remember that the body tries to remove even untreated tattoos – one of the reasons that tattoos normally fade over time. Q-Switched laser treatments make the pigment particles small enough to be removed much more quickly. Multiple tattoo removal treatments are necessary for best results.

As a rule of thumb, the greater the absorption of the laser light, the greater the energy available to break up the pigment. However, all ink colors respond better to different colors of light. 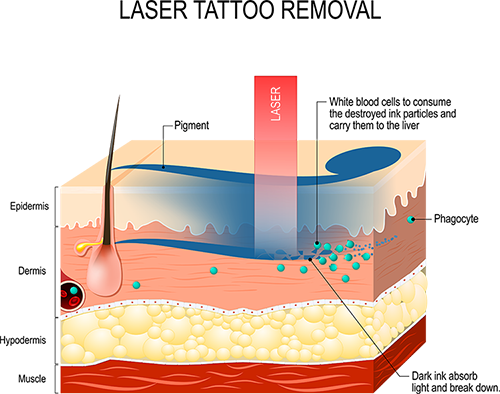 The actual absorption of a given tattoo ink may vary considerably depending on the particular pigments in the ink, which are usually not known to the patient. Also, the chemical pigments may undergo chemical changes after treatment. These factors often leads to variable and or inconsistent responses of a give color to a given laser wavelength.

Throughout history, diverse materials have been used as tattoo pigment, most notably carbon particles (as in soot), plant derived pigments, and various metal oxides and salts. Aetius of Amida published a recipe for tattoo pigment consisting of Acacia wood, gall, and vitriol (sulphuric acid) mixed with ground corroded bronze treated with vinegar, which was rubbed in over a pattern pricked by needles. In contrast to drugs and cosmetics, tattoo pigments have never been controlled or regulated in any way, and the exact composition of a given tattoo pigment is often kept a “trade secret” by the manufacturer. In most cases, neither the tattoo artist nor the tattooed patient have any idea of the composition of the tattoo pigment.

Until recently, most coloring agents in tattoo pigment were inorganic heavy metal salts and oxides, many of which were also used in paints and dyes. Cadmium, Chromium, Cobalt, Iron, Lead, and Mercury all figured prominently in these pigments, with a high incidence of allergic and phototoxic reactions, as well as scarring.

Because of the potential toxicity of heavy metal containing pigments, there has been a shift in recent years away from these agents, and toward industrial organic pigments, especially azo- and polycyclic compounds. These pigments are considered safer and well tolerated by the skin, although allergic reactions and phototoxicity can and do occur. With laser treatment, these complex molecules may be cleave into smaller molecules, some of which are considered possible carcinogens.

Surprising, the FDA does not regulate tattoo ink. For that reason, many artists may not know exact ink composition as ink manufacturers consider such information to be a trade secrete. There is, however, just ONE ink that is FDA approved – Freedom-2 Ink. Interestingly, not only is Freedom-2 Ink the only FDA approved ink, but it responses amazingly well to laser removal – usually needing only two treatments. So if you’re considering a tattoo but are unsure of how long you would like to keep it, you may want to consider Freedom-2 Ink.

Many professional tattoo pigments contain metal salts, especially in older tattoos, and even identical colors may have different ingredients, and therefore may respond differently to a given wavelength of laser light. Occasionally, a tattoo color may change after the initial treatment, making it more difficult to remove (see photo).

Multicolored professional tattoos, especially on the arms and legs, tend to respond slowly to laser treatments. Usually these tattoos will require 10 or more treatment sessions for complete (95%) removal, regardless of which laser(s) is used.

All Q-Switched Lasers cause some level of discomfort during treatment but it’s usually much like being “snapped” with a rubber band, which fades within seconds. Some areas are more sensitive than others, such as the ankle and shoulderblade. Most patients equate the sensation of removal with the same level of sensation of getting the tattoo. As treatments progress, the discomfort decreases because there is less pigment to absorb the laser energy. Anesthetic creams such as Topicaine, EMLA, or ElaMax, available without prescription, can be applied between 1 and 4 hours before treatment for very effective “needle-less” anesthesia. Topical anesthetics should be applied at least 1 hour, and preferably 3 hours before treatment. Occlusion is essential to keep the anesthetic cream or gel from drying and losing effectiveness.

In addition, Clearstone will numb the treated area prior to performing the treatment and will also aggressively cool the skin throughout the course of treatment. By doing so, many of our clients experience little to no discomfort. For individuals that are prone to more sensitivity, our on-site physician can administer a local injection, completely numbering the area to be treated.

Although true scarring does not occur with Q-Switched Laser treatments of tattoos, occasionally mild changes in skin texture may occur, especially with the Nd:YAG laser. The Ruby, Alexandrite and Frequency-Doubled Nd:YAG lasers are absorbed by skin pigment as well as tattoo ink, so darker skinned patients may notice some lightening (depigmentation) of the skin, which usually returns to normal within a few months.

Lighter skinned patients who are tanned should wait until the tan fades before treatment. The likelihood of permanent changes in skin texture or skin pigment INCREASES with the number of treatments.

Speak with a professional technician, book an appointment, or receive a free consultation!